Grayson Highlands on a perfect day.

We frequently visit Grayson Highlands State Park in Virginia around Memorial Day weekend.  It offers some of the best hiking trails in the area around the northwest corner of North Carolina, where the state meets Tennessee and Virginia.

This year, as in many past visits, we were joined by our friends Alan and Maureen, and their dogs Moogie and Django.  You can almost see the four of them in this picture.  Our friends have a mountain house near nearby Troutdale. 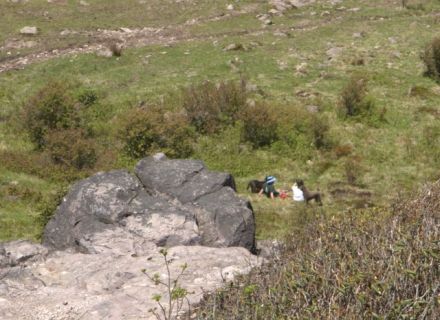 Rebecca named the house Alemo after Alan had named our mountain house Bunky’s Hill.  (Actually I think Alan called it Bunky Hill.)  You may detect a martial element here, which is pretty ironic given our shared political inclinations.

All agreed this was one of the most nearly perfect holiday days we’d experienced.  The weather was perfect, as clear a day as we’ve seen there, and the temperature was ideal for hiking.  The trails at Grayson Highlands are exposed.  Although the lack of trees makes for great views – Mount Rogers easily reachable just to the north, the familiar

profiles of Grandfather Mountain, Mount Jefferson, and the ugly condo atop Sugar Mountain to the South and West – it also provides no shade.  At 4000 feet, give or take 500 feet in elevation change, you can be hot or cold, or both, on a given day.  We’ve hiked to the top of some of those rock outcroppings on a warm day in early spring when snow was still packed two-feet deep on the north side.

There were other bonuses.  The area is home to a large herd of wild ponies that help keep the vegetation down.

The ponies are not afraid of people, and you’ll see at least a few of them on every visit.  This year we saw more ponies than ever.  Alan counted something on the order of 50 adults and eleven colts.  (Are baby ponies called colts?)  These were not just your run-of-the-mill adolescent colts, either.  Some were practically brand new.  At least one wasn’t even born yet, but we didn’t count that one.  You should definitely watch the video I plan to insert at the end of this entry.

We had a nice lunch of Rebecca’s chicken salad at the park’s picnic area.  We got another reward when we discovered several ladyslippers by our picnic table.  This led to a claim by Alan that there was a place near Alemo where you could see 80 ladyslippers.  Absurd, you say?  Perhaps a bit of hyperbole, anyway.

So after lunch we drove back over to Alemo, which is actually hikeable from Grayson Highlands, but a half-hour’s drive by car.  A few years ago we got a lift from their neighbor Don to the park and hiked back.  The trail went through a massive blueberry patch, and it was blueberry season.  We ate our fill.  Part of the path back to the house had been discovered by horsepeople (people who ride horses, not centaurs), so the hiking on that stretch was somewhat less than pleasant.

The hike to the alleged ladyslipper patch was not as long, nor as strenuous, as had been the hiking at Grayson Highlands, but adding a three-mile round-trip to a five-mile round-trip, in neither case flat, was a nice day’s workout.  Moogie might disagree; she was pretty bushed by the end of the day.

Turns out Alan’s was not an exercise in hyperbole.  In a very small triangle between the fire road and two converging creeks live a thriving colony of ladyslippers.  I counted at least 60, and didn’t get them all.

So all in all, as all agreed, it was a pretty amazing day.  Still, even with ladyslippers, views, and trillia, the gamboling of baby ponies took the cake.  (To get a bigger view click on “Watch on YouTube” and go to full-screen mode.) 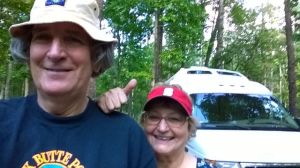 Our first campground selfie upon successfully parking the van.

Maybe you’ve heard of the Uwharrie Mountains.  Maybe, like me, you’d heard they are the oldest mountains in North America, but forgot.  They were said be have been formed by volcanic activity some 550 billion years ago, which was right about the time the supercontinent Pannotia broke apart.  Pannotia was a forerunner of Pangea, so you might say the Uwharrie Mountains are twice as old as North America.  Most of the old mountains in North American (the Appalachians) were formed by the collisions and separations of Pangea.

Rebecca and I chose Morrow Mountain State Park, located in the Uwharrie Mountains, as our first vancamping destination due to its relative proximity to Southern Pines, where I was slated for U.S. Open Leaderboard Operation training.  The internet made it sound like it might be a nice place to visit.  We were able to reserve an appropriate camp site via the state parks system’s on-line reservation system.

If one has any reservations about the Uwharries being real mountains, the view from the N.C. highway 24/27 bridge across the Pee Dee River should remove any doubts.  It’s not the Matterhorn, but at 936 feet above sea level, Morrow Mountain is a nicely formed little bubble of a mountain, within a range of several others, the highest of which is High Rock Mountain at 1119 feet.

The park was built in the 1930s by the Civilian Conservation Corps, proving once again the government can do really nice things when the chips are down. It’s the only state park in North Carolina with a swimming pool.

The campsite provided us with a good first experience.  There was an electrical hookup, which actually provided us with ample power for the lights, as well as to run an extension cord back out to the picnic table to 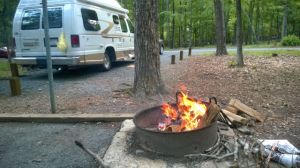 power a lamp.  We took a load of firewood, which proved sufficient for one night’s fire, but the campground sold bundles of wood so we were able to have a nice fire on night two as well.

There is a great trail system in the park.  Our first hike was to a rock formation overlooking the rivers.  The park is located at the confluence

of the Yadkin and Uwharrie Rivers, which forms the Pee Dee River and the headwaters of Lake Tillery.  Just about everybody in the park is there for the water activities.  They rent canoes and paddleboats, and many of the campers pull fishing boats.  In addition to the rock trail, we hiked two mountain trails, a quarry trail, and several connecting trails, and our only encounters were a band of campers coming in from their overnight stay at a backpack site, and a couple of horse riders.  (Horses are not allowed on most of the hiking trails.)

Noteworthy are the park’s trail signs.  This may be the best marked trail system in the United States.

We had some really fancy lamb chops I’d picked up on last-day sale at Harris Teeter for our first dinner.  I grilled them on a propane-powered Coleman grill Rebecca bought, which folds up nicely and fits into one of the van’s exterior storage bins.  After dinner, while washing dishes, I managed to take a dramatic tumble over an ankle-high tree stump.  It was quite jarring; fortunately nothing was broken (neither on me nor among the dishes), although I did open a few cuts on my leg and sustained a nice deep thigh bruise to remember the trip by.

Here’s a sample of the hiking experience in the park.

You might have noticed some trees on the ground in some of the photos.  The area was mauled by a derecho (see:  http://en.wikipedia.org/wiki/Derecho ) in June 2013.  Thousands of trees were felled.  The park was closed for almost two months.  On our visit, there was evidence everywhere of controlled burns throughout the park where they’d cleared some of the tender to prevent future wildfires.  On the north side of Sugarloaf Mountain the controlled burn took out a large amount of mountain laurel.  Some of them were resprouting at the base from their roots, and some were issuing new leaves from the burned branches.

And so to bed … yes, the bed in the camper was good for sleeping.

We acquired our 2006 Pleasure Way Excel tricked-out van today in anticipation of our cross-continent trip next summer.

New van at point of departure, with the crew and salesman John Doomy.

I drove the camper home. It’s not really the camper’s maiden voyage; it came with 32425 miles on it. It has, in fact, already been to Alaska, but it was maiden to us.

A few impressions about driving: Side winds can be noticeably buffeting; going around bends at 70 mph is “exhilarating”; and driving NC 55 through Apex is torturous.

One lesson was learned – batten down all the hatches before you get started. As soon as I hit the road the tv revealed itself to be unsecured.

Suggestions for a name for the vehicle will be considered.