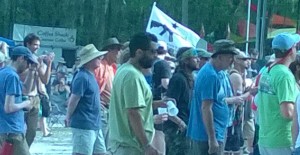 We took our campervan on a “dry” run preparatory to the Big Trip.  We drove to Live Oak, Florida, for the Suwannee Springfest music festival.

I’ll digress a moment.  The festival is surely the definitive collection of tie-dyed apparel.  The park is a giant campground, with loop after loop of spaces for both RVs and tents.  I use the term spaces in conjunction with tents quite loosely.  Groups of friends pitched tents and/or RVs in close proximity, then surrounded their enclave with tie-died blankets to create private compounds.

At the Porch stage (one of three main outdoor venues), on one occasion a demonstrator walked through the crowd waving a flag with an image of an assault weapon and the words “Try to take it from me.”  And nobody paid him any heed.  Well, almost nobody.  I was tempted to confront him, but Rebecca pointed out the skateboard he was toting was probably loaded.  Hooray for peace-loving hippies.

I had an appointment for a few tweaks to the van for the morning of the trip.  I was to drop Rebecca at her office, take the van to the nearest RV service center for the tweaks, then pick her up and start driving south.

We got into the van, turned the key, and click click click.  Dead battery.  Fortunately, the configuration of our parking permitted Rebecca to run jumper cables from her car in the garage through the side door to the van battery, and we got it started.  Add a new battery to the tweak list.

The journey was otherwise inauspicious, other than being a lot of driving.  We spent the first night in a motel outside Savannah.  Why, you might ask, did we not stay in a campground?  We had a coupon that knocked the price of the motel room down to $5.  We made a rule for the Big Trip:  If a motel is cheaper than the campground, we stay in the motel.  Oh, there was some confusion at the motel, however:  The credit card number Travelocity/Expedia issued to the motel to pay our rent (we’d already paid) was denied.

tie-dye.  I called this a “dry run” above, but it really wasn’t dry.  We peed in the van bathroom.  That was our big accomplishment for the trip.  It beats trekking to the shower house three or four times in the middle of the night.  Or morning.  (Did I mention there were reasonably-priced beer vendors inside the festival?)  I know, you’re gonna say you’re camping, pee on the ground; and you’d be right, but the population density was not conducive.  For that matter, peeing in the van is even easier than peeing on the ground. 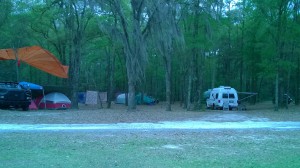 Campsite, before the tie-died blankets went up around our neighbors.

I should mention, in keeping with the theme, the low point of the adventure.  Cutting across the Meadow Stage grounds after the first night of music, we reached an impasse.  Rather than retrace our steps, we looked to negotiate our way to an alternate exit.  Not noticing a set of stairs, I chose to attempt to walk up a pile of concrete slabs.  The first step was about three feet high, and I miscalculated.  I found myself airborne, and landed square on my behind.  Sitting here at the computer is still somewhat, shall we say, uncomfortable.

The campground was bordered by the Suwannee (or Suwanee) River.  The Suwanee rises in the Okefenokee Swamp, then meanders to the Gulf of Mexico.

Stephen Foster chose the “Swanee” for his song by looking at a map, and smartly realizing Swanee rang better than Pee Dee (the original “way down upon the” river).

Even though Foster never actually saw the river (nor lived as a slave on a plantation there … there really weren’t plantations in that part of the South), the State of Florida adopted the song as it’s state song.  As sensibilities have changed over the years, so have the words to the song.  There may no longer be reference to the good life of the plantation, and there definitely have been bowdlerizations of some racially insensitive nomenclatures. 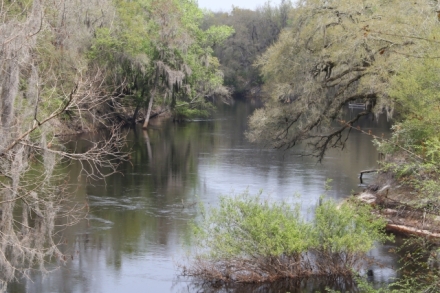 On the return trip we drove through Bunnlevel, North Carolina (see how I brought the theme of this article full-circle?), where I saw a sign of an aptly-named enterprise: 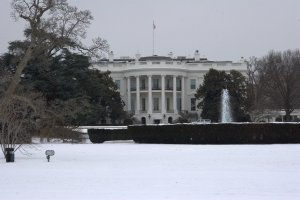 I accompanied Rebecca in February when she went to Washington, D.C., to attend the National Association of Counties’ Legislative Conference.  Rebecca has been attending this conference for years, but this will be her last.

For several years she’s organized a breakfast where numerous county commissioners from North Carolina joined their Congressional representatives and senators for a round of glad-handing, food, and short speeches.

I’ve gone the last three years, and up until this year the breakfast was snowed out.  This year, the snow was already there so the breakfast went on as scheduled.

The NACo breakfast was the final item on the multi-day agenda.  While Rebecca was attending meetings, I did some walking.

We were staying at the Marriott Hotel next to the National Zoo, so I ventured over to the zoo for a short visit.  I was surprised to discover there was no admission charge; the zoo is just a big park with animals. 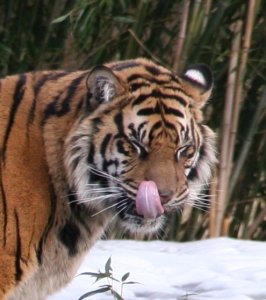 On my longest walk, I set out first for the National Cathedral, then continued up Massachusetts Avenue to American University, my littlest sister’s alma mater.  The American campus was snow-covered, like the rest of the city, but the library had a sign saying “Welcome … Visitors” so I went inside to warm up.

American U. quad, Cupcake Chapel across the way.

My next destination was the Capital Crescent Trail, which runs along the Potomac River, between the river and the Chesapeake and Ohio Canal.  I wanted to get a good look at the river, which was covered in ice.  I walked along Nebraska Avenue to Arizona Avenue.  The sidewalks, unlike the other parts of the city I’d visited, had not been shoveled, and they were treacherous.  But I only slipped down once.

I got really close to the river, but I couldn’t yet see it.  The sidewalks ended; there was a staircase leading to a bridge that crossed the road, so up I went.  There was no indication where I was, although there was a trail.  I thought about taking it in the direction of Georgetown.  Fortunately, a man walking his dog came up the stairs and walked toward me.  It turned out, as he explained, I wasn’t on the Capital Crescent Trail.  He directed me back to the road, thence up a side road where he instructed me to look for an unmarked trail that would lead to a bridge across the canal.

Good thing I encountered him; otherwise I never would have been able to access the trail.

As it was, I had a nice two- or three-mile walk that paralleled the canal and the river, eventually affording me good views of the frozen river.  I came out at Georgetown, then hiked back to the hotel.  I took the picture below from one of the bridges across the river; it was brutally cold and the wind was howling.  I was glad I didn’t lose my hat. 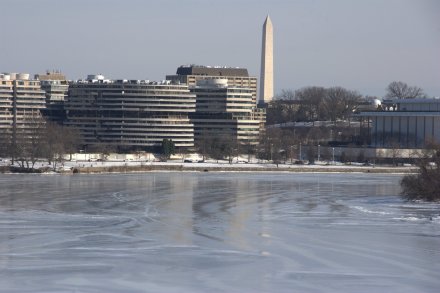 The frozen Potomac River, with the unmasked Washington Monument in the background.